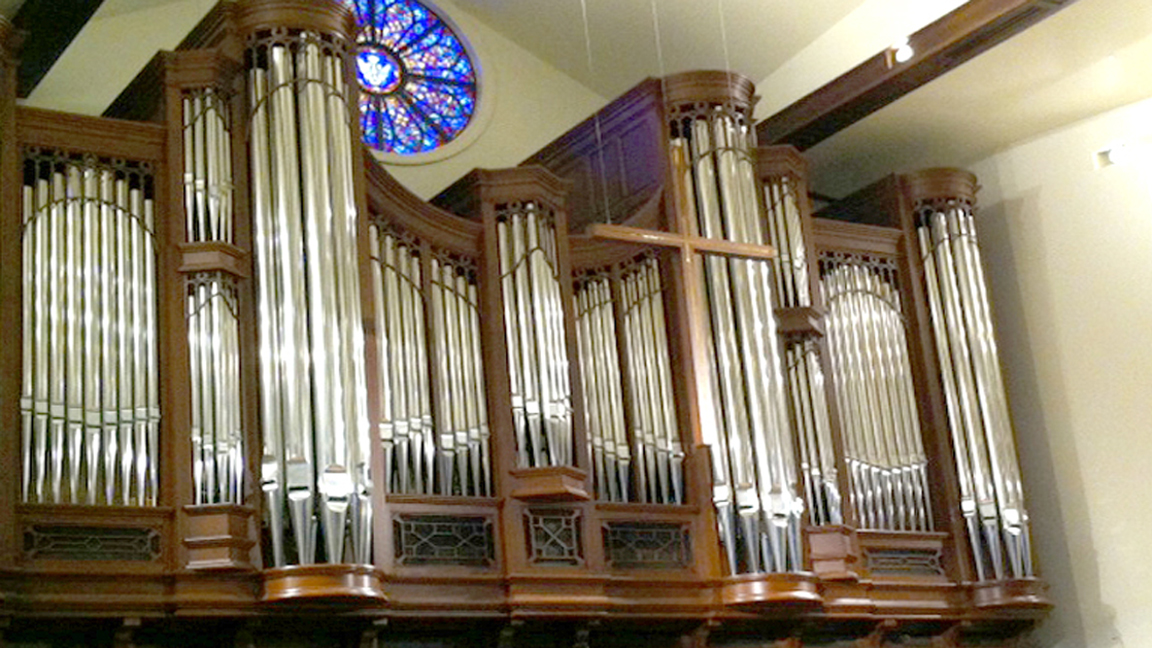 Chipping away at the backlog of unprocessed collections (there’s always a backlog in archives), I came across four spiral-bound volumes that, at first glance, appeared to be unremarkable.  As I delved more deeply into their contents and researched their provenance, I uncovered a much more interesting story filled with dedication and passion, and a whole lot of patience.  The notebooks appeared to be self-published and were titled Recueil de Morceaux d’Orgue à l’Usage Spécial des Élèves de l’Institution Imperial des Jeunes Aveugles de Paris (Collection of Organ Pieces for the Special Use of Students of the Imperial Institution for the Blind Youth of Paris).  Using a book in our museum collection, retired music professor Harvey H. Miller had painstakingly transcribed the four printed volumes from the original braille music notation.

The transcribed volumes include:

The original braille volume was published in 1863 by the school for the blind in Paris and is on display in our museum. Although the book is very fragile it is in fair condition.  The composers, all four of whom were blind, were alumni and teachers at the same school in Paris where Louis Braille (1809-1852) was also a student and later a teacher.  Braille, a musician and organist himself, had developed braille notation for music which was introduced in his 1829 publication the Procédé pour écrire les Paroles, la Musique et le Plain-chant au moyen de points (the Method for writing Lyrics, Music and Words using dots), a copy of which is also on display in the museum.

The collection of braille organ music in Recueil de Morceaux d’Orgue was not widely published, and never appeared in print.  Enter Harvey Miller.  In 2008, Professor Miller began a tedious project to transcribe these 19th century works from the braille copy in our collection.  Over a 10-year period, Professor Miller made many trips to Louisville, accompanied by his guide dog, and later an assistant as well.  In the end, he succeeded in transcribing all 54 organ compositions from the original braille music notation into print.  Facing challenges of deciphering dots that had become flattened, or delicately handling the fragile pages, Miller persevered and a printed book was published in 2017, available to sighted musicians for the very first time.  This publication is currently held in numerous libraries including Harvard, Juilliard, the Library of Congress, Oxford, and even as far away as universities in Great Britain, Germany, Hong Kong and Australia.  The National Library Service (part of the Library of Congress) also produced a modern braille and large print version as well.

As I processed this small collection, one of the unmarked CDs contained a recording of a concert.  After a bit of detective work, I discovered it was a recording of this very music.  In 2013 the APH Museum presented “Unlocking Hidden Braille Music,” a special performance by members of the American Guild of Organists Louisville Kentucky Chapter.  These musicians performed a number of works from the Recuil de Morceaux D’Orgue— music quite possibly heard for the first time outside of 19th century Paris.  The recording admittedly isn’t the best in terms of sound quality, but what a treasure that this concert was preserved at all.  Now, thanks to Professor Miller we have these wonderful additions to our museum collection and because of his efforts, everyone has access to these hidden musical gems.