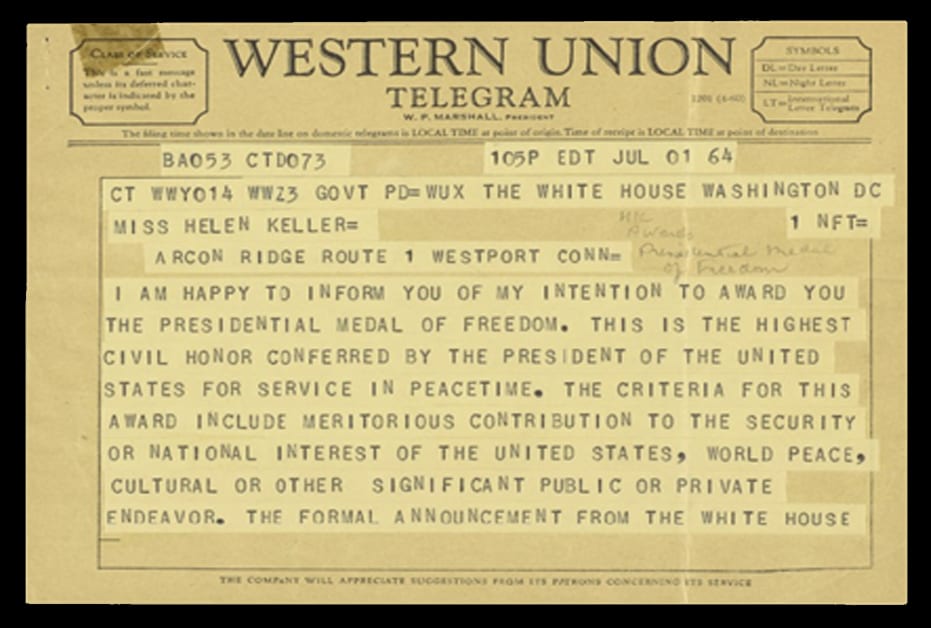 Documents in the AFB Helen Keller Archive include letters, notes, newspaper articles, programs, and more. One of the most interesting to me has been the large number of telegrams in the collection. Seeing so many different types and ages of telegrams made me think back to a time in the 1980s when my aunt sent me a telegram for my birthday. Getting the special message delivered by courier is something I’ll never forget. But it made me wonder what happened to a service that, though extremely popular at one time, is clearly outdated today.

The first telegram was sent from Washington to Baltimore on May 26, 1844.  Samuel Morse, the inventor, used his new code to send a message to his partner Alfred Vail. Almost overnight telegrams changed the way the world communicated. By 1850 there were 20 telegraph companies in the US. Several of these consolidated to form Western Union in 1851. In 1961 Western Union built the first transcontinental telegraph line, cementing its place as the primary company for telegram service. Telegrams reached their peak during the 1920s and 30s, when it actually cost less to send a telegram than it did to place a long-distance phone call. This was in part due to telegraphs being decoded by an electronic receiver, rather than by hand.

Companies typically charged by the word, with a maximum of 10 or 15 allowed. Not completely unlike today’s digital technology, there were both official and slang styles of “telegraphese” used to efficiently abbreviate words or characters into a telegram. The Adams Cable Codex and The ABC universal commercial electric telegraphic code are just two examples of codebooks for telegraph style. The choices for shortcuts are often baffling. The word “Entice,” for example, stands for the phrase, “They are not entitled to it.” The word “STOP” was used instead of using a period because it cost the sender less money. Punctuation cost extra, but the word “STOP” was free.

Countless telegraphs were used for daily communication. A few are memorable–historically significant telegrams such as the SOS sent from the RMS Titanic, or the notorious Zimmerman Telegram, which ushered in US involvement in World War One. The sight of a Western Union courier was dreaded during the World Wars because of the bad news it might bring. I remember, for example, seeing the telegram announcing that my uncle was missing in action. It was kept in a family album.

As long-distance phone rates dropped and telecommunication technologies advanced in the 1960s, Western Union began to slowly phase out couriers in favor of postal delivery. In 2005, a surprising 20,000 telegrams were sent for $10 a message. Then, in January of 2006, several people rushed to be the last to send a Western Union telegram when the announcement was made that the service would be eliminated.

However, there are still internet services that send “telegrams” The telegram looks like the real thing, and it is delivered directly to the addressee’s home. In reality, though, it’s just a printed letter, delivered via USPS, costing as much as $30.