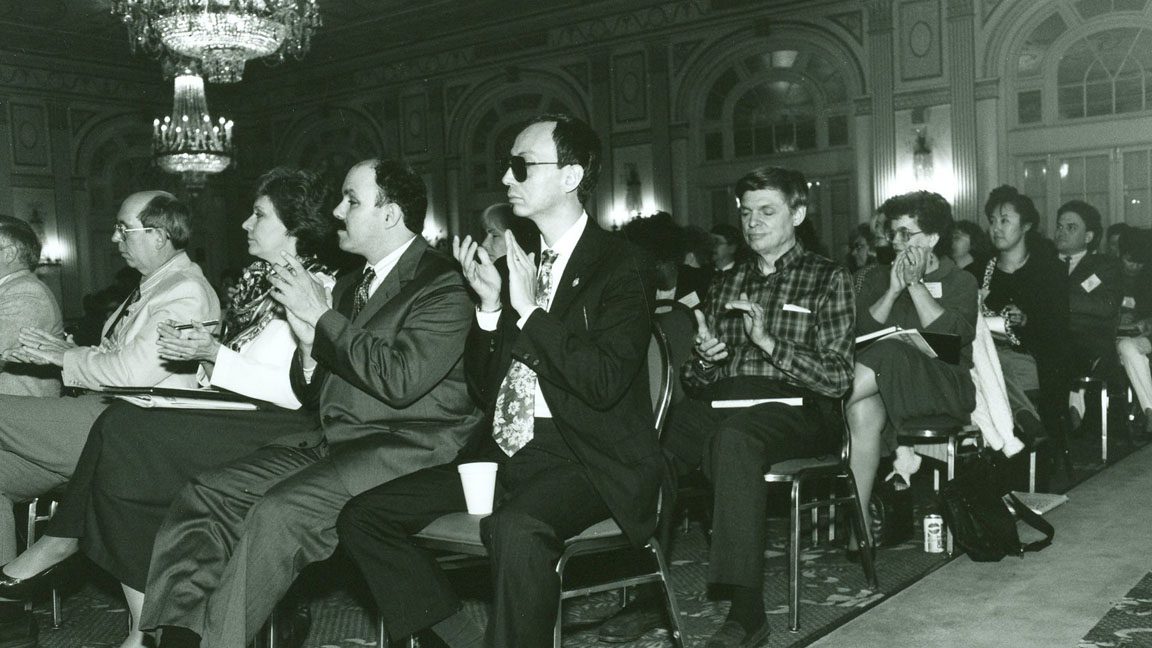 Photo shows the audience for the 1993 Keynote Address, held in the Brown Hotel in Louisville, KY.

Maybe you are not in the habit of analyzing your life or your family’s history the way we do here in our museum. We preserve the history of education and rehabilitation of people that are blind or visually impaired, but we also serve as the company attic for the American Printing House for the Blind. We are the company memory, the place our team comes for answers about the first this, or the origins of that.

So every year about this time, folks start asking those same questions, because, yes, it is Annual Meeting time. The APH Annual Meeting started back in 1880, after President Rutherford B. Hayes signed the Act To Promote The Education of the Blind. The Act created the fund that pays for accessible books and educational aids for people who are blind all over our country. It created a large committee of officials (we call them Ex-Officio Trustees or EOTs) across the U.S. who work with kids and families and teachers to figure out what each kid needs. The trustees get together each year in early October to share information and review the work of the Printing House. We call that the Annual Meeting.

At that first Annual Meeting in 1880, held next door to APH at the Kentucky School for the Blind, the trustees created bylaws that specified the annual meeting would be held every year in August. But that didn’t last very long. You see the trustees are scattered all over the country. In the late nineteenth century, it was a long trip by train to Louisville, and it was expensive, so the trustees decided to meet every other year as a body at the Annual Meeting of the American Association of Instructors of the Blind, the AAIB. They were all going to be there every year anyhow, right? So two birds with one stone, or so the thinking went. And in the off years, business was transacted solely by the local Louisville board (what was then called the Executive Committee) made up of local business and community leaders.

And the meeting drifted a bit earlier in the year, to early July. We don’t know exactly why. It could have something to do with the federal fiscal year, which began on July 1 back then. Around 1910, the state of Kentucky decided that state corporations like APH could not hold meetings outside the state, so suddenly the meeting in Louisville gained new importance. It was in the midst of what we call the War of the Dots, the historical struggle between the supporters of the Braille System and its competitor New York Point. Braille supporters suspected APH Superintendent B.B. Huntoon, a supporter of New York Point, to be pulling political shenanigans to keep braille proponents from changing APH policy. So trustees from around the country began boarding trains every year and making the long trip.

In 1948, APH suddenly moved its annual meeting to November, which by 1982 had gradually slid back to its current date of early October. I’ll be honest, I have no idea why. I thought maybe they were chasing the fiscal year again, but the feds did not move the beginning of the new fiscal year from July 1 to October 1 until 1976. It is awfully nice in the Ohio Valley in early October.

So why do we do things the way we do? In some instances, it is because that’s the way we always do them. No one knows. Think about your own family and its traditions.  Do you celebrate a holiday on a particular day, or at a particular time of day every year, or in a particular way that seems unique? And how did that come to be? I wonder.