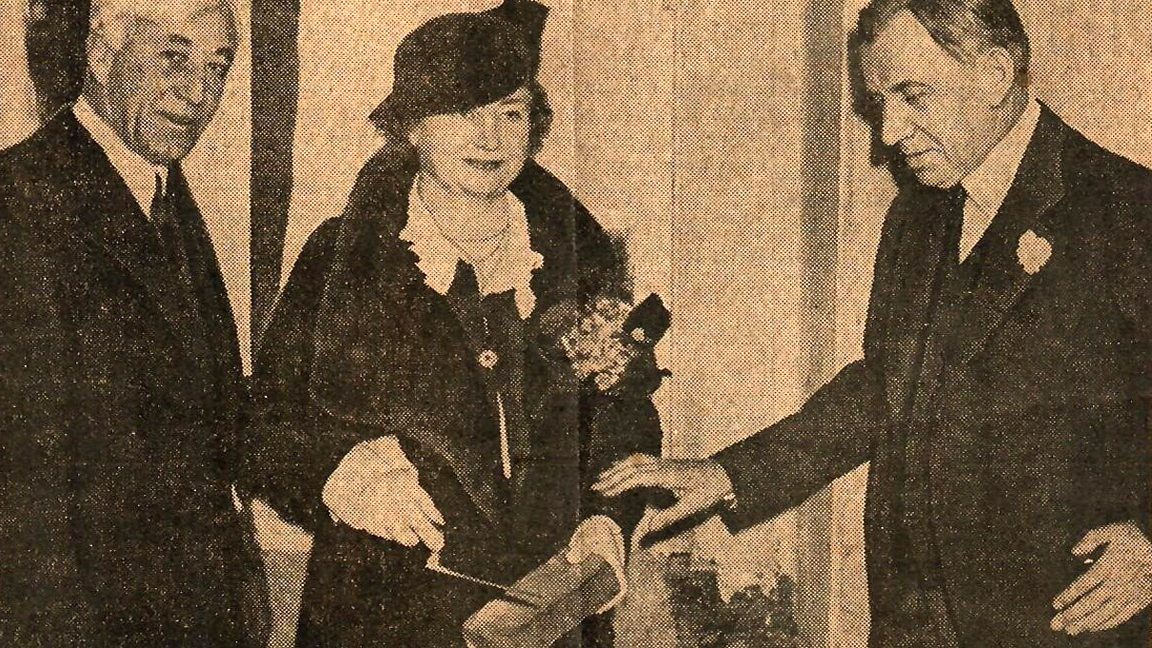 Time capsules have long been an intriguing way for people to communicate through the ages, be they historians or grade school children. But few have had such a journey and story as the one that recently arrived at the AFB Helen Keller Archive at APH.

At 2:00 p.m. on December 5th, 1934, a ceremony was held at 15 West Sixteenth Street in New York City. The occasion: the laying of the cornerstone and time capsule in the American Foundation for the Blind’s newly constructed building. Purchase of the land and construction of the building, estimated to be about $140,000, had both been paid for personally by AFB President M.C. Migel. The ceremony began with an invocation by Rev. Edmund Melville Wylie, followed by some violin and tenor solos. Dr. John H. Finley, who served both as the editor of the New York Times and the president of the New York Association for the Blind, presided over the ceremony. As one of his duties, Dr. Finley announced that President Franklin D. Roosevelt had accepted the Honorary Presidency of AFB, and had sent a telegram that very day congratulating the Foundation on its accomplishments.

After addresses by Finley and Migel, Helen Keller stepped forward to speak. “A warm sense of satisfaction sweeps over me as we place within this cornerstone the record of what has been done for the blind in the past. Thrilled by a spirit of adventure, I look forward to yet more splendid achievements in the future.” In a sealed copper box in the cornerstone were placed artifacts that would not see light again until 2021.

The ceremony was broadcast on CBS radio station WEAF. That broadcast is significant because it was the only way for Helen’s companion and teacher Anne Sullivan Macy to attend. Anne had lost her vision entirely and was undergoing an operation to bring some of her vision back. She listened to the event from a nearby hospital as she recovered from surgery. 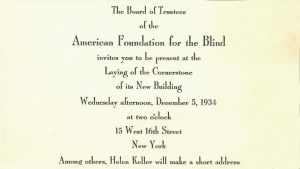 The ceremony concluded with Migel and Keller placing the time capsule in the cornerstone of the building, and applying mortar to the stone. Contemporary newspaper articles and photographs show Keller holding a brick and trowel, and one photo may even show the time capsule sitting in a hole in the wall just behind the scene. These photographs, articles, an invitation to the original ceremony, and even the telegraph from FDR are all held in the AFB Helen Keller Archive. 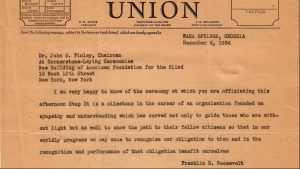 The time capsule was likely removed from the 1934 building in 1995, when AFB moved to 11 Pennsylvania Plaza. Still sealed, the time capsule was then kept at AFB for another 40 years or so. On September 23, 2021, the capsule was opened at AFB’s Centennial Gala on the rooftop of the Tribeca in New York City. After its contents had been displayed for a short while, it was packed up by archivists, shipped by a fine arts courier, and arrived back “home” to the AFB Helen Keller Archive, now held at the American Printing House for the Blind in Louisville.

Some of its contents are typical of a time capsule, like a set of 1934 coins and a copy of the New York Times. Others were personal in nature, such as a collection of signatures of every employee at AFB. Perhaps the most forward-thinking, though, was a collection of audio media. The masters for a record called “An Ear View of 1934” were included in the time capsule. The metal masters were coated in a special wax for preservation. Also included were instructions, etched into a glass mirror for the ages, on how to remove the wax coating by “heating to about 80° C and cleaning with gasoline.” Also etched in the mirror were instructions on how to use the included Audak Special Pick-Up record playing arm, and the two sets of RCA Victor chromium record player needles. It even explained that “Present phonograph records are molded by heat and pressure with these masters as dies. Records turn 33RPM. The pickup herein is 8000 OHMS impedance.”

The contents of the time capsule will be exhibited on tours held during the Hidden Legacies of Helen Keller Symposium, September 17-18, sponsored by the American Printing House for the Blind and The Filson Historical Society.

The American Foundation for the Blind Archive, housed at APH since 2020, never fails to provide surprises. This September 2021...