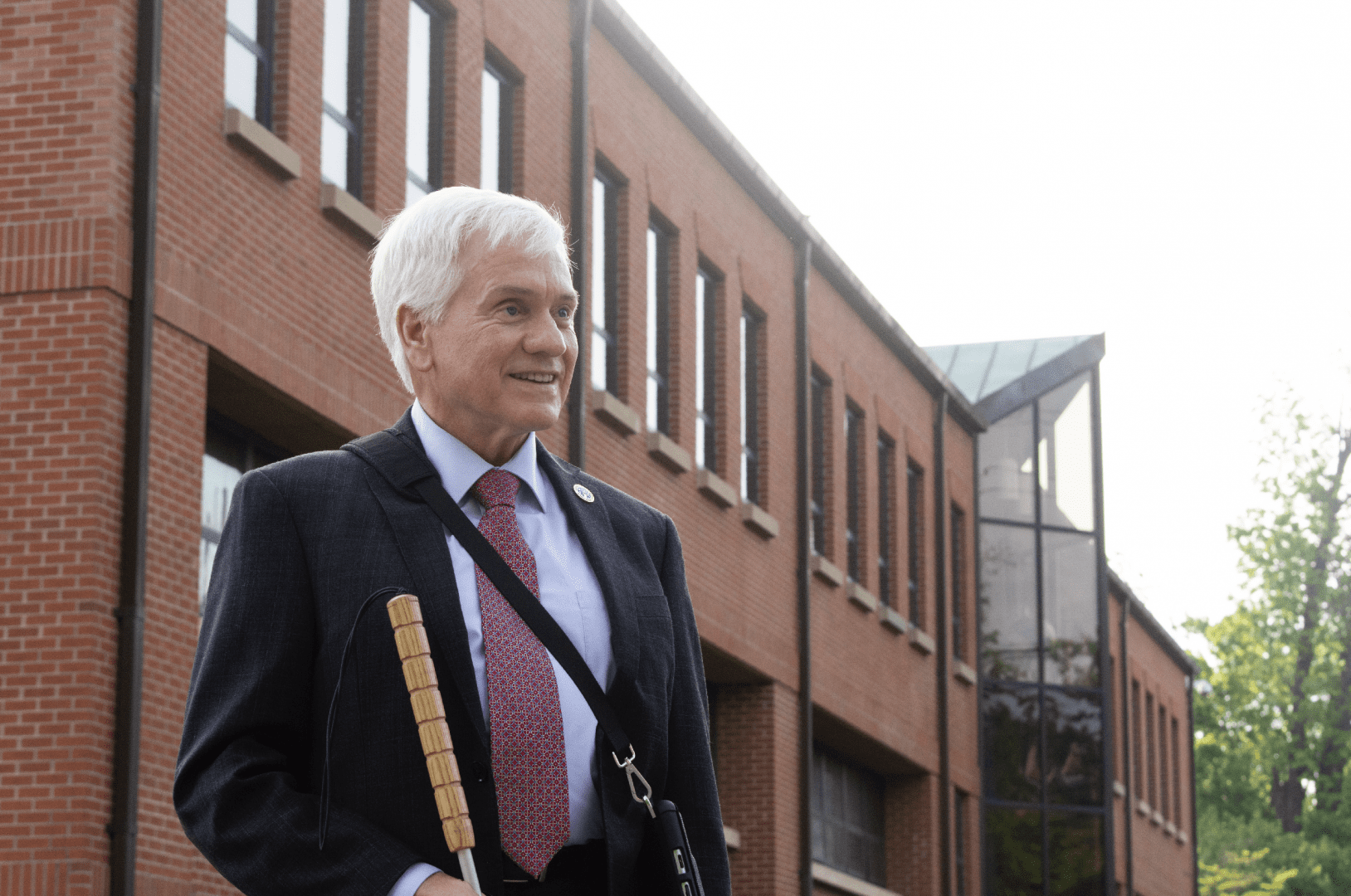 Gary Mudd, VP of Government and Community Affairs, has announced his plans to retire from APH in January 2021. If you ask anyone at APH, they’ll tell you, Gary is at the heart of what we do. He has been integral to supporting everything from the APH Museum and InSights Arts Competition to the National Prison Braille Program and NIMAC Resources Services team, but most notably, he will be remembered for his advocacy.

“For the last thirty years, Gary Mudd has been the face of APH in Washington, educating generations of Representatives and Senators and their staff. Gary’s confident yet humble path through the corridors of powers in DC has guaranteed that leaders on both sides of the aisle supported and encouraged our mission. They may have argued about everything else, but when Gary walked through the door, they sat down, listened, and agreed to work on behalf of people who are blind or visually impaired,” says Micheal Hudson, Director of the Museum of the American Printing House for the Blind. “Gary has been a force of nature for which APH, and all those who have access to our products and services, will be forever grateful.”

While Gary’s legacy is tremendous, his path hasn’t always been clear. Raised on a farm in a town of 200 people on the Nelson and Washington county line in Kentucky, his earliest memory of APH goes back to when he was in the sixth grade. “I had recently gone blind and started classes at the Kentucky School for the Blind next door to APH. I had to share my braille textbooks in a couple of classes in which I really needed to have my own. That should not happen. Every textbook I used had ‘printed at the American Printing House for the Blind’ prominently displayed on the front page. At night in the dorm, I could hear braille presses running (we had a second shift then), and my teachers spoke reverently of APH. I remember thinking that APH must be a great place to work, but I had no thought of working here at the time.”

Joining APH in October 1986, Gary says he had to badger then APH President, Dr. Carson Nolan, for a job. He had been working in radio for four years when he made a place for himself as a marketing associate at the Printing House. Gary believes this is a valuable lesson. You have to be persistent and open to opportunities. Few people plan to be where they are today. “There is no map, and I don’t think you can follow a map anymore. You need to be flexible and follow the path your life takes.” We’re incredibly thankful that Gary’s path led him to APH and from there to Washington, where he has made countless trips to ensure APH has the funding to continue to produce the educational materials similar to the ones he used as a student.

When asked about his time at APH, Gary said, “I will always think of people at APH as my extended family, doing good work. I know that sounds overly sentimental, but it’s true.” Gary has impacted so many lives, but he couldn’t have done it alone, he says. “I had a lot of help and support along the way,” specifically calling out previous Director of Government and Community Affairs Nancy Lacewell as “the brains behind the entire thing,” referring to their advocacy in DC. “The people we work with are important, you hire the right people, good people, and then get out of their way.”

“Most folks in Washington are no different from us. They want to make good policy, but in order to do that, they need good information. We gave them information that they could rely on, and they trusted us. Simple as that. Relationships are based on trust.”

Gary Mudd’s impact on the lives of people who are blind or visually impaired is vast, and he is leaving big shoes to fill. He and the rest of the APH staff want to make sure that the perfect fit is found. Passionate accessibility advocates and legislative liaisons are encouraged to apply to fill Gary’s role.

Where will Gary’s path lead him next? “Having more time with my wife, Susan, our daughters and their husbands, and of course, my 4 grandchildren. They have supported me throughout my time at APH.” He looks forward to spending time outdoors tandem biking around the beautiful parks of Louisville Kentucky. He also plans to spend a lot of time reading, including catching up on years’ worth of recommendations from his wife. “Maybe I’ll even read some of the books I had said I’d get around to reading back in high school and college. I never get bored.” Speaking of college, Gary is interested in going back to school. “I was a sociology major, but I’ve always been interested in learning more about the law and government.” We think that no matter what Gary decides to pursue next, he’ll knock it out of the park, like always.

Why We Celebrate Helen

Who knows what you need better than you? Well, no one does, of course! It is time to start using...

If My Cane, Guide Dog, or Monocular Could Talk, What Would It Say?

This activity is pulled from our Virtual ExCEL Camps happening summer of 2020! While these activities are written to fit...