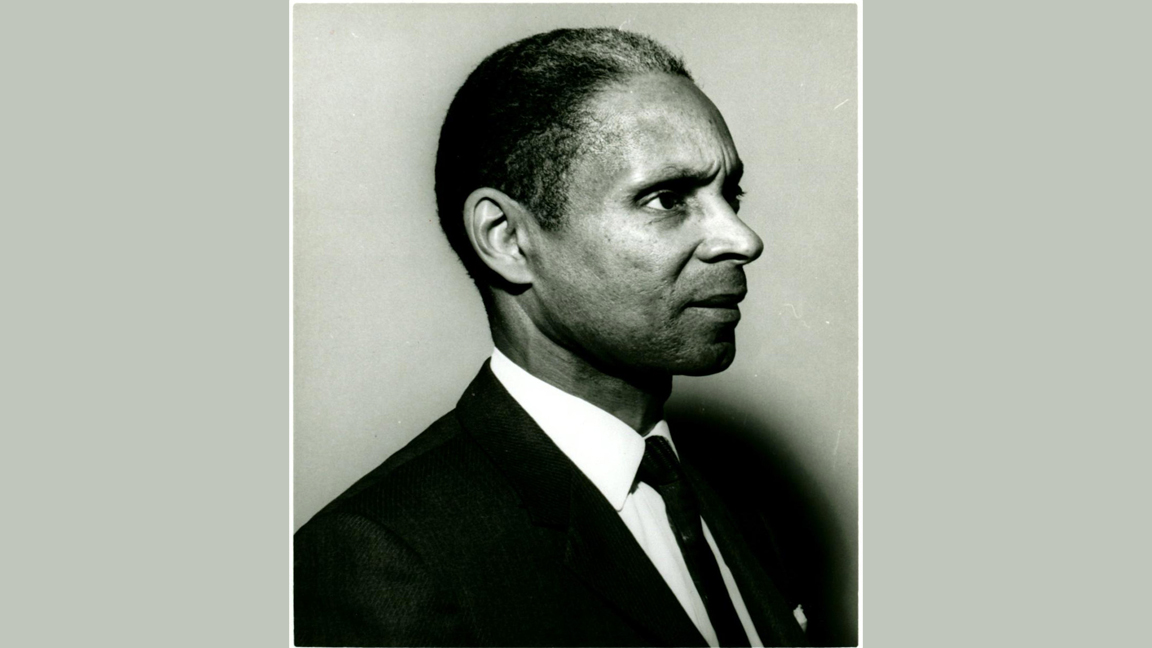 In my work cataloging the materials in the AFB Helen Keller Archive, I’ve come across  hundreds of folders with the subseries “SCHOLARSHIP RECIPIENT.” Each folder is dedicated to one individual who received a scholarship from the American Foundation for the Blind. But really, each folder was an introduction to a young person at the beginning of their adult life. Often, a portrait was attached to the first paper, a very basic questionnaire about their plans for the future. Each piece of correspondence with the student and their references, sometimes over periods of several years, was also kept in the folder. It left me wanting to learn more about the directions that these scholarships took each person. In honor of Black History Month, I researched Joseph Himes, a blind African-American man born into a segregated country, who went on to get his doctorate, travel the world teaching, and author many books.

Joseph Himes’ folder begins with a newspaper article titled “Blind Cleveland Boy Gets Memorial Scholarship for Excellence in His Studies.” Joseph’s parents were teachers, and he had always planned on attending college, perhaps becoming a lawyer. After getting the highest average in his high school class and having the best record in the school’s history, he decided to attend Oberlin College. Towards the end of his time there, he exchanged some very frank letters with AFB President Robert Irwin about the uncertainties in his future. Irwin suggested that he become a social worker for African Americans living in the South, where it would be more likely that he be accepted by his clients. Irwin also hinted that Joseph’s hopes for an additional AFB Scholarship to graduate school would be rejected.

Although Mr. Himes was offered a position teaching at Piney Woods School after college, his persistence paid off. He received a fellowship at Oberlin for graduate school. By the time he received his master’s degree, it was 1932, and he had trouble finding work due to the Depression. When he eventually began teaching, the schools fell upon their own financial difficulties, and his salaries were either reduced or completely withheld. Still, he completed the work for his Master’s degree and began doctoral studies at Ohio State. He wrote letters to several prominent people inside and outside of AFB asking for help, including Helen Keller. On the rear of his letter to Keller, a note is written in pencil – “Teacher thinks the Foundation aught [sic.] to help Mr. Himes — a most wonderful fellow. P.” (Polly Thomson.)

The folder contains a few letters from 1955 – 28 years after his initial application. One document is a “where are they now” questionnaire.  In that document,  he states he has been a postdoc faculty member at UC Berkeley since 1946. Another memo mentions that he wrote an article on “Attitudes Toward Blindness” for AFB Press. And finally, there is some correspondence in which Dr. Himes asks AFB if the organization might be able to help with some vocational guidance for a man he had met that was blind. AFB responded by sending him a pamphlet called “Facts About the Foundation,” and giving a brief explanation as to what kind of agency AFB is as if Dr. Himes had never encountered them before.

In 1969, Dr. Himes accepted a position as professor of sociology at the University of North Carolina at Greensboro where he stayed until his retirement in 1977. During that time he was a Fulbright professor at Helsinki University in Finland and also the University of Madras in India.  Dr. Himes wrote several books including Racial Conflict in American Society, Racial and Ethnic Relations, The Study of Sociology, Conflict and Conflict Management, Racial Conflict in America, and Social Planning in America.