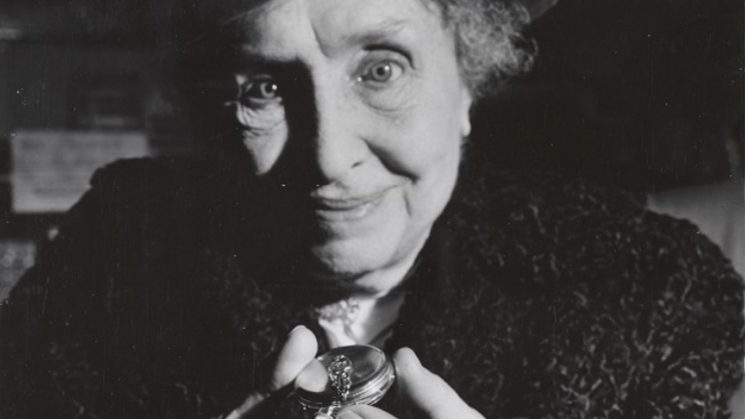 A Birthday Gift With a History

When Helen Keller celebrated her fourteenth birthday at the home of Alexander Graham Bell on June 27, 1894, she received a unique tactile watch as a birthday gift. A German Ambassador used the Swiss-made watch to read the time with his hand while the watch was in his pocket. That way, he would not be so likely to offend any of the kings, presidents, or other important officials that he might be speaking with in public. Raised gold pins ran along the outside edge of the watch to represent hours, and a lever served as a minute hand on the back.

In 1864, that ambassador gave the watch to a Swiss consul general in Washington named John Hitz. Hitz later became the first superintendent of Alexander Graham Bell’s Volta Bureau for the Deaf. It was through that work that Hitz first met Helen Keller in 1892. They became very close friends despite an age difference of over 50 years. Helen called Hitz the “foster-father of my soul” due to his introducing her to the religion of Emanuel Swedenborg. Hitz called her “my deeply beloved daughter, Helen.” It was of course Hitz who gave the watch to Helen Keller as a birthday gift at Bell’s party for her. It had already been important to Hitz for 30 years, and then became a prized possession of Helen Keller’s as well. She carried it around the world with her and often spoke about how the watch symbolized a special relationship with her friends Bell and Hitz. In the 50 years, she owned the watch, it only left her possession one time.

On January 17, 1952, Helen Keller left her overnight case in a taxicab on the way to Grand Central Terminal in New York City. She was devastated and made public appeals for the return of the watch, which she believed to be of little value to anyone but her. Having heard of her appeal, the New York Pawnbroker’s Association discovered the watch in one of their shops. It had been pawned for $20 by a man who gave a fake name and address. The watch was returned to Helen, and she kept it for the rest of her life. The story of the watch is well documented in the AFB Helen Keller Archive, and the watch remained with the Keller family until 1975. The family of Helen’s brother, Phillips Brooks’ brother, donated the watch to the National Museum of History and Technology at the Smithsonian Institution in 1975.

Justin Gardner is the AFB Archivist at the Museum of the American Printing House for the Blind.