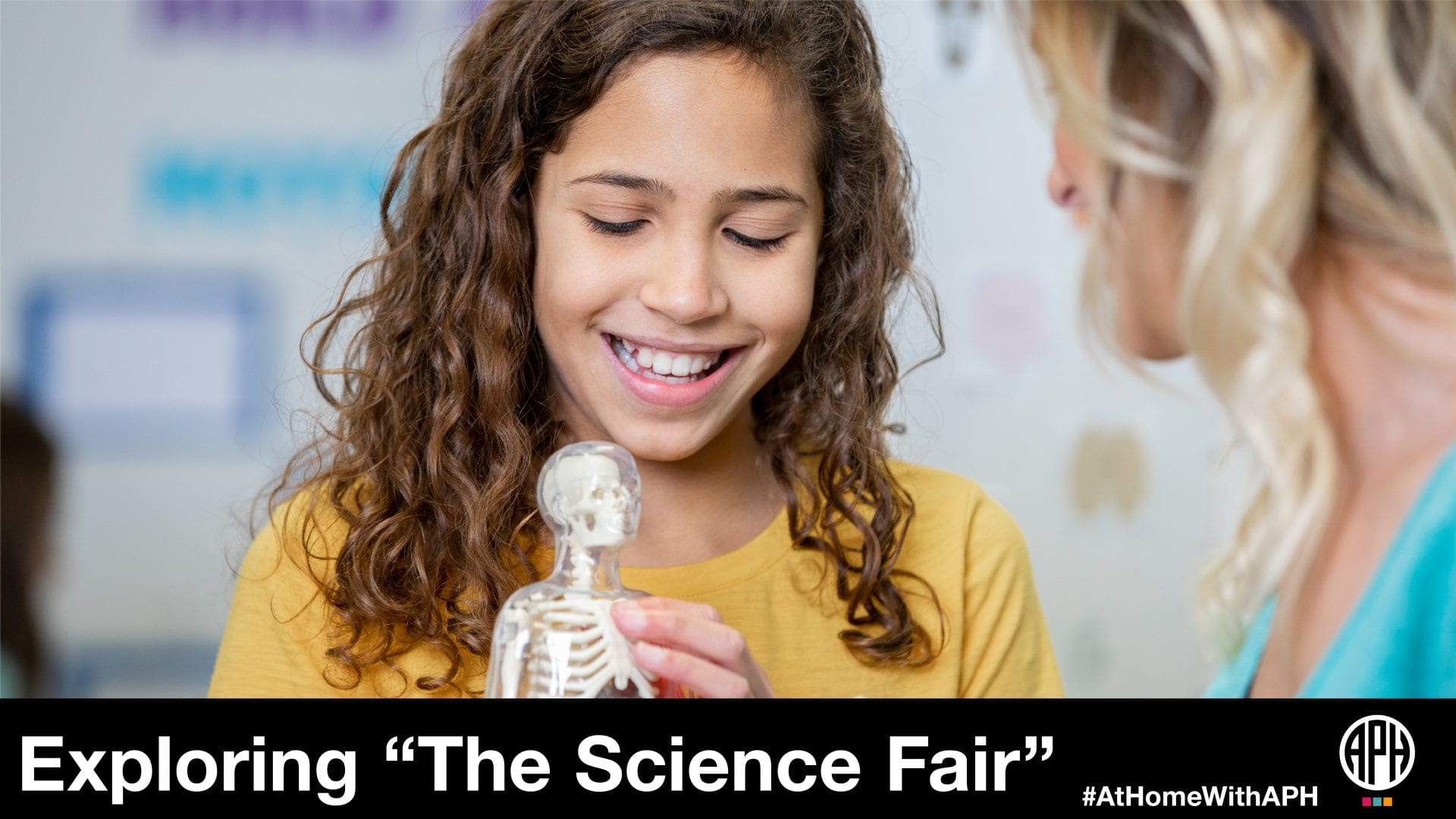 Exploring Experiments at “The Science Fair”

This activity includes a story about kindergarten students learning about fifth-grade science projects exhibited at a science fair. Read the story to yourself first to get familiar with it. Then you can help your child understand what happens in the story as you read it out loud to him or her.

After the story, there are questions you can use to discuss the science experiments in it with your child.

To help your child to understand the story better, collect the items listed below that can be used to work through the experiments in the story.

Tell your child you are going to read a story called “The Science Fair,” told by a girl named Izzy, who is blind, about kids at school having fun trying different science experiments.

After the child has explored all the items, set them on a table and put different amounts of water in the glasses so they are ready. Ask your child to listen as you read the story for the science experiments that go with each of the items you have. Let your child experiment with the items after you read about each exhibit in the story.

If needed, below are definitions for some of the words in the story that a young child might not know. You may also wish to talk more about the senses of hearing, touch, smell, and taste as they come up in the story.

gently: carefully, lightly, not in a rough manner

various: many or different

predict: to say what you think might happen in the future or in an experiment

by Robin Wingell and Izetta Read

Ms. Jackson led our class down the hall to the fifth grade classrooms. “All right, boys and girls,” Ms. Jackson said. “These students have worked very hard on their science projects. Remember to be polite and thank them for allowing us to visit and try their experiments.”

Luke, Abigail, and I were excited. We had been waiting all week for the science fair. The fifth graders had experiments set up all around the room on tables.

The first table we stopped at was an experiment using drinking glasses and water. Each glass contained a different amount of water. The students wanted to find out what would happen when they tapped each glass gently with the handle of a metal spoon. They discovered that each glass made a sound when they tapped it, but the sounds were different. The glasses with more water made a lower sound, and the glasses with less water made a higher sound. We had fun tap, tap, tapping them to make a song.

The next table had a basket of various items and a large magnet. The fifth graders asked us to predict which items would stick to the magnet. I predicted that the craft stick and the fork would stick, but not the stapler. Then we took turns holding the magnet over different items. I was surprised when I used the magnet! The craft stick did not stick to it, but the fork and the stapler did. We learned that items that stick to a magnet are called “magnetic.” After experimenting with several items, I was able to predict which ones were magnetic just by feeling them. Ms. Jackson said science is full of predictions!

We tried several more experiments that were interesting. We made predictions for each one first. Sometimes the predictions were correct and sometimes they were not. Then Ms. Jackson said we only had time for one more experiment. Luke, Abigail, and I hurried to the next table. This one had food. I could smell it!

For this experiment, we had to smell and taste mystery foods without seeing or touching them. We smelled each food and predicted whether it would taste salty, sweet, bitter, sour, or spicy. Some foods were easy to guess by their smell. Luke guessed the sweet cake right away because he said it smelled just like his Grandma’s German chocolate cake! For some foods, like vanilla flavoring, the delicious smell was a whole lot better than the bitter taste. Yuck! One other food did not have a smell, but boy did it have a taste! When I bit into it, I thought my mouth was on fire, but Abigail loved it. She said it was a spicy jalapeno pepper like the ones she eats on her nachos at home.

When we got back to our classroom, Ms. Jackson asked us to share what our favorite experiment was and why. It was tough to pick a favorite. I liked them all. After everyone finished sharing, I told Ms. Jackson, “Science is fun! I can’t wait to be a fifth grader to make my own science experiment.”

“Izzy, you don’t have to wait until the fifth grade,” Ms. Jackson responded. “Science is all around us. Every day is a great day for a science experiment!”

After you read the story, here are a couple questions you can ask your child:

For an additional activity, let your child go around the house to test what the magnet sticks to (is magnetic) and what it does not stick to (is not magnetic).

This activity comes from the writers of our materials to teach young children with visual impairments to read and write using braille. To learn more about those, check out https://aphbop.org/

What Do Magnets Stick To?

Kid’s Health: Your Tongue (This includes looking at your tongue with a mirror, but your child can feel the parts of his or her tongue – with clean hands!)

For more resources please check out our #AtHomeWithAPH resource list for free and accessible activities, tips, webinars, and more from APH, our partners, and the field at large. Have a free and accessible resource you would like us to include? Email us at communications@aph.org to tell us about it!

APH’s Reach & Match® Learning Kit helps young children of all abilities develop their motor and social skills, all under...

Are you starting to go a bit stir-crazy? Maybe you are frantically trying to find fun activities for your children...