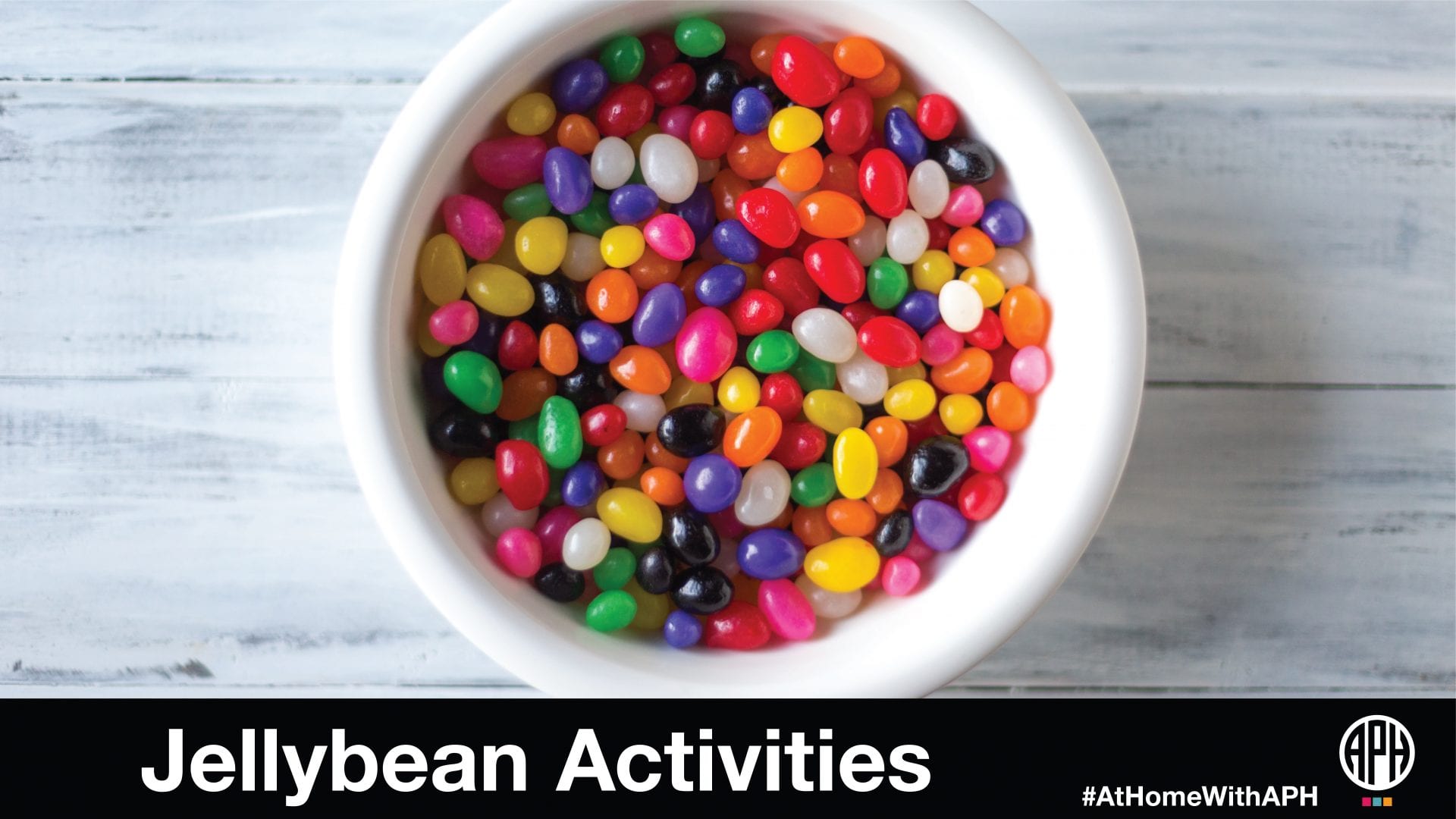 We’re not talking about ice cream, we’re talking jellybeans! Forty-six years ago there were only seven jellybean flavors. Since then the universe of jellybeans has expanded. Now—with over 100 flavors—there is truly something anyone can love.

And these flavors – we think—are only for the brave: stinky socks, rotten egg, sausage, ear wax (really?), and lawn clippings!

Discuss your child’s favorite flavor. Have them make up some outrageous flavors of their own and then google it. It may exist. If not, they’ve invented something new. Older children can write down these jellybean favs and not-so favs then poll friends and family on social media. Which flavors get the most votes?

Add some learning to a preschooler’s day by gathering up some jellybeans (real or a substitute of your choice—dried beans work well since we all have some of those in our cupboards nowadays) –and listen to Jellybean Jungle, a print/braille book for preschoolers from APH with touchable illustrations. (If you happen to have a copy of the book, share it and encourage your child to explore the braille text and tactile jellybeans on each page.) Don’t have the book? Don’ worry! Listen to this audio recording (transcript follows instructions) and act out the story being told using the real (and delicious) things!

Count out jellybeans with your child. Line them up, or count them out into an egg carton, one jellybean into each space—moving from left to right. Have them share the jellybeans, giving you a jellybean then keeping one for themselves, back and forth, until all the jellybeans have been divided. How many do you each have?

For learning the position of dots in braille letters, choose a letter–such as the first letter of your child’s name (“l is for Lauren”). Using a six-muffin tin or half-dozen size egg carton, help your child drop a jellybean into the dot 1, dot 2 and dot 3 positions–naming the dot number as each jellybean is dropped in place. Have a turn at naming other words that begin with “l”. Choose and show other braille letters, then snack on your braille “creation”!

Way down south where the jungle grows,
farther and deeper than anyone goes—
a jellybean jungle stands all alone.
Only I have been there,
a long time ago . . .

There were jellybeans of every kind
as thick as they could be!
top, bottom, middle, sides—
covering every tree.
Counting all the jellybeans hanging on the
trees, my mouth just started watering—
how tasty they would be!

There was one jellybean—
licorice, I think—

and four jellybeans—
hot cinnamon, instead.

and seven orange jellybeans
hanging on a  vine.

and I counted nine jellybeans
a spearmint green.

I counted up to ten—
they must have blueberry.
I could’ve picked a bushel
if I hadn’t had to hurry.

I’d only picked one jellybean
when I heard such a roar!
Deep inside the jungle
that’s a sound you don’t ignore!

No time to pick more jellybeans to carry in
my pocket. I ran and ran and when
I stopped—my chance—well,
I had lost it . . . I’d left the jellybean jungle very far behind.
I’ve never ever found it since,
even though I’ve tried.

But I still have that jellybean;
Someday I plan to see if that jungle
Jellybean will grow into a tree.
Right there in my own backyard I’ll have a
jellybean tree,
and all my friends will come
and share the jellybeans with me!

How are jellybeans made?

Did you know your personality can predict which flavor jellybean you will like?

Is your favorite jellybean favor missing? Here are some flavors that have been retired. (Maybe they’ll make a comeback?)

And if you are really craving jellybeans now, here’s how to make your own!

For more resources check out our #AtHomeWithAPH resource list for free and accessible activities, tips, webinars, and more from APH, our partners, and the field at large. Have a free and accessible resource you would like us to include? Email us at communications@aph.org to tell us about it!

Make it a B-B-Beautiful Day Increase your child’s awareness of beginning word sounds with this easy activity using items found...

Appropriate for Elementary School students Let’s learn about our extraordinary lungs! You can simulate the action of the lungs with...

Looking for a kid-friendly science experiment to do at home with your child? With some simple ingredients found around the...