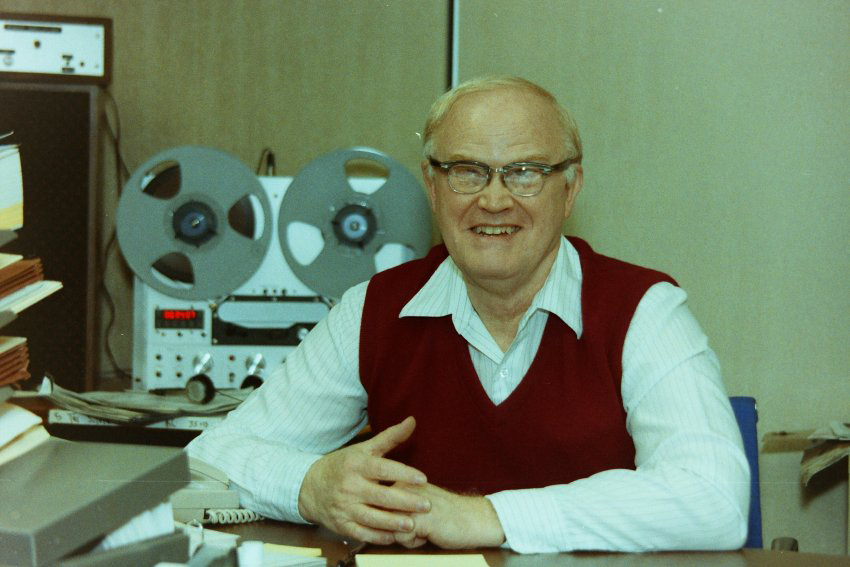 Raymond Randles in his studio office in 1993.

The time between Thanksgiving and Christmas here in our museum is usually pretty quiet. The tourists and school kids and families are fewer in number, and it gives us time to catch up on some work, and best-case scenario, reflect. This week, after Thanksgiving, in proper context of the season, I’m giving thanks for the life of our buddy, Dr. Raymond Randles. Raymond died a few weeks ago, but what a wonderful life he led. He grew up in Louisville, attended the Kentucky School for the Blind through 10th grade, and then graduated from Atherton High School. He received his MA in History from the University of Louisville in 1961. He taught history here and in Iowa for a few years, then returned home to earn his PhD from the Southern Baptist Theological Seminary in 1980.

While still in school and needing some extra cash, Raymond was hired by the legendary Tina Lou Wallace as a part time Talking Book proofreader in 1973. A proofreader in the studio listens to the books we record and checks them for mistakes before we can submit them to the client. He became the studio director in 1991, supervising the monitors, narrators, and proofreaders. He knew and worked with all the classic APH narrators: Terry Hayes Sales, George Patterson, Jim Walton, Randy Atcher, all the greats. He lived through the unionization of the studio in 1981. He oversaw incredible technological change, overseeing the end of vinyl record production and the total conversion to cassette tape books, and the beginning of digital recording. Raymond also played a pivotal role in supporting a good working relationship between the Printing House and our primary customer for audio products, the Library of Congress.

And after his retirement in 1999, Raymond still wasn’t done. Our museum director then, Carol Tobe convinced him to join our museum staff as director of our oral history program. We call it our “Corporate Memory Project.” Raymond and his little Marantz digital recorder captured over one hundred irreplaceable interviews, most in the original 1936 recording studio that now doubles as our museum conference room. His first interview, on August 2, 2004, was with retiring Educational Research Supervisor Hilda Caton, who had started in 1970. His last was in October 2016, with APH Ex-Officio Trustee Kristine Takekawa from Hawaii. Raymond’s interviews are formal yet folksy, fun but informative. One quirk was that every interview featured a question about the APH café and whoever was running it at the time. It became a side joke between all of us.

Raymond was old school. He always wore a tie and jacket to his interviews. His thick glasses gave him a professorial look, but you rarely saw him when he was not smiling. He was always a perfect gentleman. He spoke softly, in a whispery tenor that squeaked as he grew more animated. He never greeted me in any way, but as “Mr. Hudson,” even though I was 50 years his junior. I tried to tell him that my dad was Mr. Hudson, but he wouldn’t have any of it. I signed his annual contracts and that was that. That contract paid him about $1500 a year. What a mind blowing bargain. And wherever Raymond went, there also went his dear help mate, Jean. His wife of over fifty years edited our oral history interviews. When I listen hard enough, I still hear Jean eating her lunch outside my office. Alas, Jean is gone too. Mr. Randles, you sir, were an American original, and you will be missed. It was a pleasure to know you. And don’t worry. I’m going to find out what they were serving in the cafeteria.