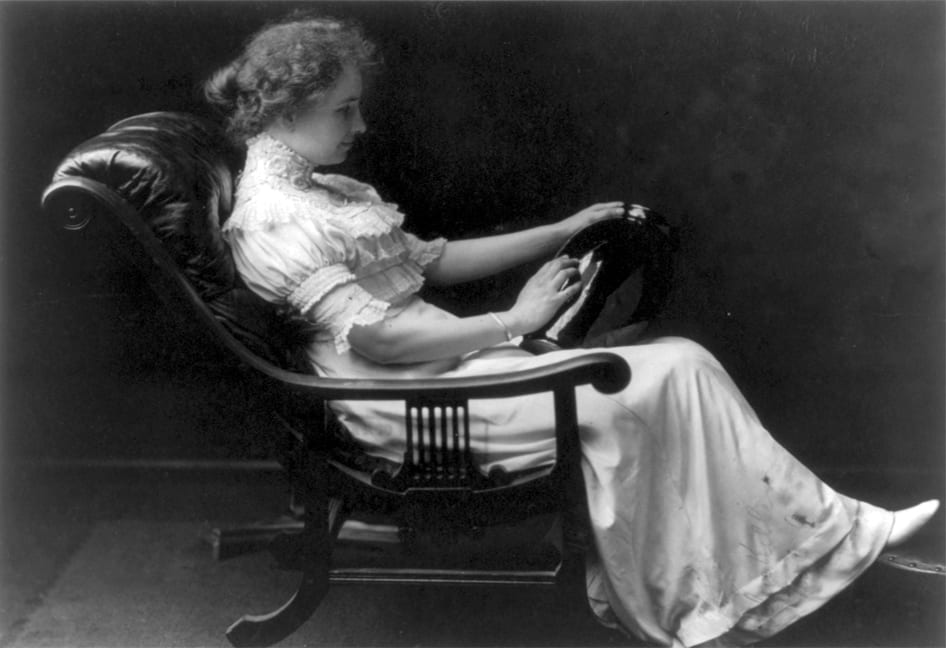 The Chair Went Out the Window

Museum objects and their stories are codependent. The artifact is the real deal. After all, it was there when history was being made. But the story behind the object is the object’s voice, its song if you will. Each needs the other to communicate, to have the power over our imaginations that museum artifacts hold. One of the items that came to our museum recently from the American Foundation for the Blind Helen Keller Archive is a leather upholstered chair. Interesting enough, I suppose, if you’re interested in Victorian furniture, but otherwise only remarkable for the rather poor repairs on a couple of broken legs. How and why did this thing get into a museum? When you know the story, well, things get interesting.

The chair was originally purchased from the Paine Furniture Company in the 1890s and used in the Boston home of Dr. John Frank Pratt (1830-1897) and his wife Anne Currier Pratt. Anne C. Pratt was a research assistant to inventor and educator Dr. Alexander Graham Bell. If you don’t know the story, Dr. Bell was instrumental in linking Arthur and Kate Keller up with the Perkins Institution when they were looking for help with their daughter Helen. That connection sent a young Anne Sullivan to Tuscumbia, Alabama in 1887 to work for the Kellers.

Through Bell, the Pratts and their three adopted daughters became good friends of Annie and Helen, often hosting the pair during their frequent visits to Boston. Anne C. Pratt was a close confidant of the pair during the “Frost Fairies” plagiarism controversy with Perkins Superintendent Michael Anagnos. (That’s a story for another day, but it is important to know that the Pratts supported Helen when she needed them most.)

Following her father’s death in 1897, one of the daughters, Annie S. Pratt, went into the photography business at the Whitman Studio in Chelsea, MA. The studio took many pictures of Helen Keller and Anne Sullivan that would be widely used in magazines and Helen’s books. If you look in “The Story of My Life” and “Song of the Stone Wall,” the studio’s work is well represented. During the Great Chelsea Fire of 1908, the chair was thrown out of a window at the Pratt House, presumably to save it, but badly damaged. That’s where the crude iron braces and poor repairs on the legs come from. Annie S. Pratt moved it to her studio, where it was used in 1909 to take a lovely studio portrait of Helen Keller holding a vase, with Pratt’s assistant Edgar Byrd operating the camera. Later, Annie Pratt’s notes, along with a print of the photo and the chair itself, were donated to the American Foundation for the Blind.

I think it makes the chair and the photograph so much more interesting when you connect the dots between Bell, Keller, the Pratts, a terrible fire, and a photographic studio. What do you think? Are there items in your home with a handwritten note from a relative explaining them?