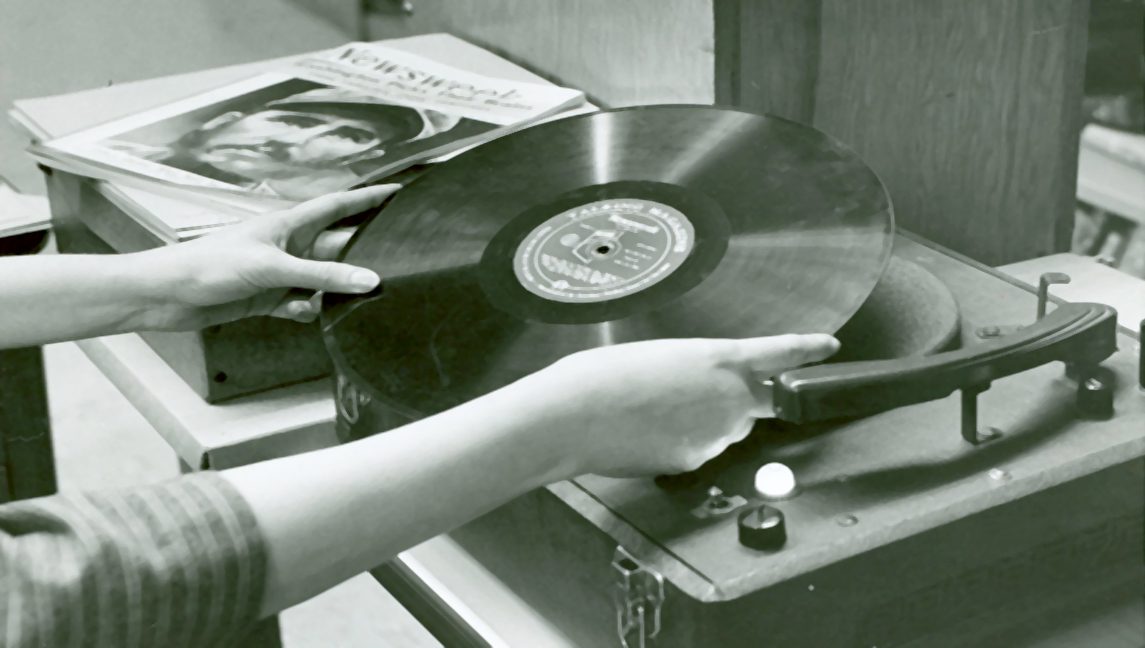 Everything old is new again. Or so the adage goes. But there is an underlying truth to it, even if it comes in unexpected forms. As technology advances at a rapid pace, it seems as though some things are out of date almost as soon as they’re made these days. But then there are the old classics that never seem to fully disappear from the cultural zeitgeist. They might not have all the bells and whistles of modern technology, but that’s kind of what makes them charming.

We recently received a donation of John Milton Society Magazine Talking Book records from the 1950s. As I worked to process this collection I reflected on the advancements in technology for media. I was particularly struck by the cyclical nature that the lifespan records seem to have taken. Records were on their way out when I was a child, being replaced by cassette tapes. Those tapes were replaced by CDs a relatively short time later, only to be replaced by mp3s, which have largely been supplanted by streaming these days. However, records never fully went away—there were always enthusiasts who preferred records for the sound quality they produced. And in recent years it seems that vinyl—as it’s often referred to now—has had a resurgence.

This vinyl revival proves helpful in my tours when speaking about the Talking Book studio. Over the 20 years I’ve led tours at various museums I’ve had to alter how I describe certain artifacts, particularly for children who are likely less familiar with some of these older media technologies. Years ago, I used to describe records as “kind of like large CDs” but kids today don’t necessarily know what CDs are. Now on tours when I tell visitors about Talking Books, most kids know right away what a record is (although cassette tapes are sometimes another matter…).

I find it both interesting and amusing how my reference points have had to evolve during my tenure as a tour guide. But that’s our challenge and our task as public historians—to find relevant ways to meet our visitors where they are when we explain elements of the past. Every tour I give is slightly different as I try to find a connection with each group to make the tour interesting for them. How I share our story with a group of seniors from Kansas may be very different than a tour I give to a group of local kids on a field trip.

I’m sure technology will continue to evolve and who knows what kinds of media we’ll have in the coming years. As public historians, we will have to find ways to make today’s technology relevant to our visitors of the future. It is said that nothing endures but change, and our job as museum professionals is to make sure those changes are not only documented and preserved but also interpreted in ways that future visitors can learn about, and appreciate, APH’s role in making products that are part of that technological evolution.

Mary Beth Williams is the Museum Collections Manager at the Museum of the American Printing House for the Blind.

Online Archives in a Digitized World

Have you ever done research in an archive? Maybe for a school project, or just researching a topic of personal...

You know those history research shows that trace your family’s history? I love shows like that, and they’re a great...