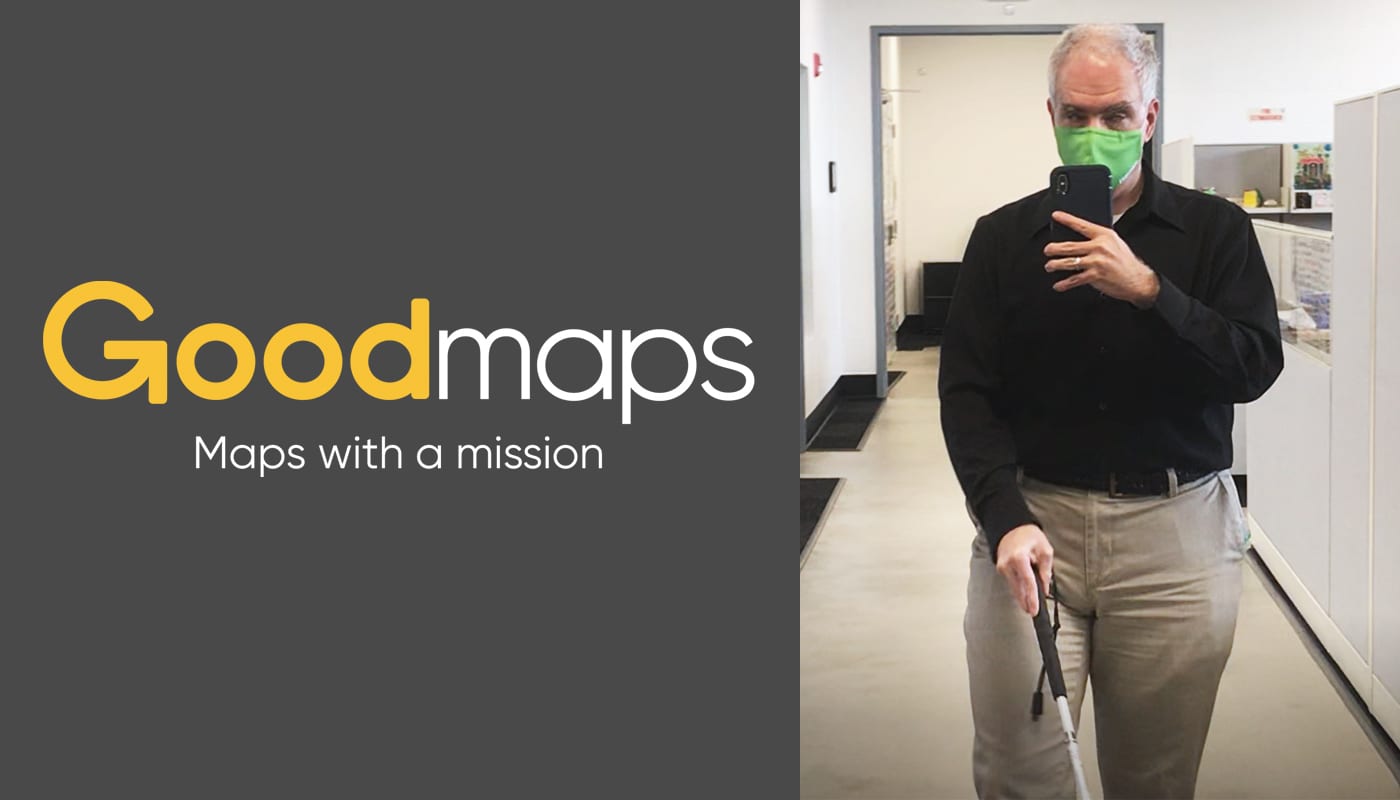 From TomTom and Garmin to built-in apps on every smartphone, people have been using turn by turn navigation for outdoor travel for almost two decades, but what happens when you step inside the office building, store, or airport? For people who are blind or visually impaired, the maps, monitors, and hanging signage provide no additional information on the correct direction to go. The concept of accessible indoor navigation, while well discussed in the disability community, is still in its infancy when it comes to implementation. GoodMaps is working to change that.

For several years we at APH worked to develop the beacon-based navigation app, Nearby Explorer, which allowed users to not only navigate outdoor spaces but indoor public spaces within the same mobile app. The more work we put into the program, the more it was evident that we needed to find an easier to implement, more accurate indoor positioning option to make public spaces universally accessible. In comes GoodMaps. Born as a spin-off of the work APH started, GoodMaps started in early 2019 with a mission to further the cause of accessible navigation building on the work of Nearby Explorer with some game-changing innovations.

The first major change made by GoodMaps was to move away from the less accurate, more expensive, and burdensome hardware infrastructure that had been limiting the viability of indoor navigation for decades. Now powered by LiDAR-based mapping, GoodMaps creates maps by using mobile LiDAR scanners, which quickly produce digital representations of the space. By utilizing LiDAR and image recognition, fast and accurate maps are created at a fraction of the effort of traditional indoor hardware approaches. Camera-based positioning (CPS) provides potential accuracy as good as three feet, a vast improvement over the 10-50 foot distances of beacon technology. This was just the first of the team’s goals.

The GoodMaps Advantage promises; more accurate navigation, more simple implementation with little to no upkeep, to be more usable by providing free and intuitive apps for users, and more secure for the venues who can control levels of information access.

APH Huntington, a new program in Huntington, WV, provides access technology and self-advocacy trainings to people in the community who are blind or visually impaired. One initiative of the program, the APH Huntington Indoor Navigation Initiative, is brought to the Huntington community in partnership with GoodMaps. Since September 2020 GoodMaps has mapped:

We’re proud to announce that GoodMaps has been named a CES® 2021 Innovation Awards Honoree for GoodMaps Explore. This announcement is being made ahead of the first-ever, all-digital CES 2021, the world’s most influential technology event, happening Jan. 11-14, 2021.

“I am honored and humbled to accept this award from CES on behalf of the GoodMaps team,” CEO Jose Gaztambide says. “It reflects the tireless hard work that the entire GoodMaps organization has invested to achieve and propel forward our mission to make the indoors more accessible, welcoming, and safe. We thank CES for their recognition.”

APH and GoodMaps are sharing a virtual booth at CES 2021 so stop by and talk to our experts about all of the technology we’re creating to make the world a more accessible place.

Previously only available on iOS devices, you can now access the GoodMaps app, GoodMaps Explore on Android devices by downloading it from the Google Play Store. Learn more about their recent update and hear from users about what they love about navigating the world with GoodMaps on their site.

Looking Forward to 2021: An Exciting Year to Come

Stay tuned for all the exciting new announcements to come in the new year. From presentations and conferences to launching a new Smart City, GoodMaps has a lot of exciting announcements that we just can’t tell you about yet.