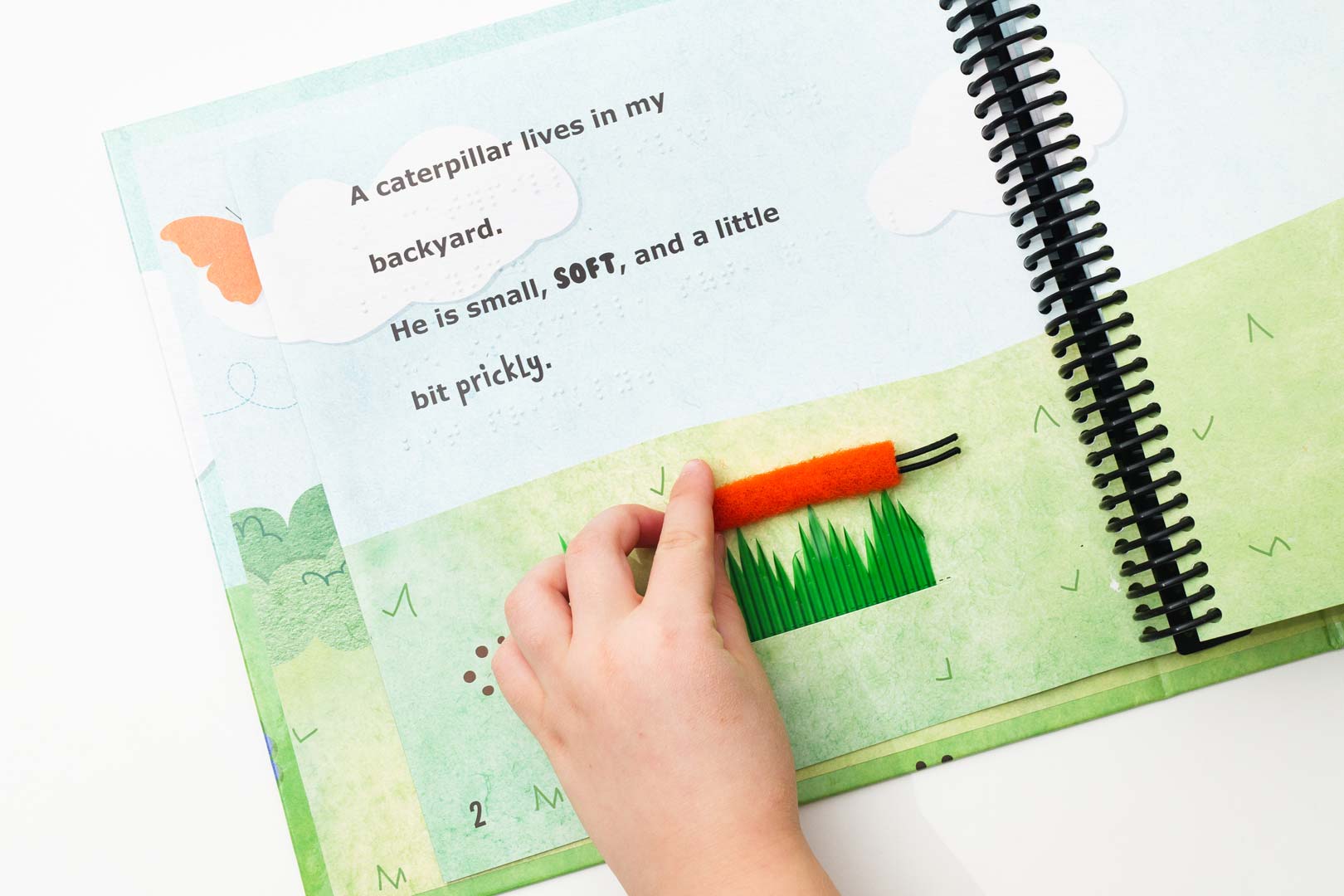 NOTE: Due to supply chain issues this product is currently unavailable. APH is working diligently with our vendors to have this back in stock as soon as possible. We apologize for the inconvenience.

APH is on a mission to modernize the storybooks in our On the Way to Literacy (OTWL) series, which was first produced in the early 1990s. We spoke with Emergent Literacy Consultant Suzette Wright about the complete redesign of one of the most popular OTWL titles: The Caterpillar.

Our OTWL storybooks are beloved by many readers, and we knew that after over 30 years of enjoyment, it was time for a refresh. The purpose of the modernization process is to replace deteriorating film art with digital art, reduce page sizes to enable in-house printing of the books at APH, and modify tactile and visual illustrations. “Users have been asking for books that are more engaging for the sighted adult reader and typically sighted peers,” said Suzette. “It’s important that parents be excited to share the books with their child. Their enthusiasm (or lack of) likely carries over to the child! We know from research that textures and interactive components are more engaging for young tactual learners and have a stronger connection to their own experiences of the world.” As we began the redesign process, we knew we wanted to:

Over the past several years, five books have had their print art and fonts (now sans serif) modernized, thus making them more visually interesting for people with typical vision. These books include Something Special, That’s Not My Bear, Jennifer’s Messes, Giggly-Wiggly, Snickety-Snick, and Geraldine’s Blanket (UEB).

Our current initiative involves the complete makeover of The Caterpillar by Josephine Stratton (1991) seen below. This read-aloud tactile storybook with large print/braille text is designed to assist young children in developing key literacy skills such as listening comprehension, phonological awareness, oral language, and object/shape recognition as they read about a caterpillar who lives in the narrator’s backyard. “Caterpillar was a good story and based on the perspective of a young child who is a tactual learner, but the illustrations were not engaging,” said Suzette. “It was not very colorful at all—only black print on a yellow page with raised-line drawings . OTWL books are focused on tactual readers and the secondary audiences who are reading the book to or alongside them, like a sibling. There was the need to make Caterpillar more engaging visually for those readers. Also, there were no interactive components and only one texture in the book—the caterpillar! We saw the potential to do so much more, and in the process, even the story changed so we had a new text, though based on the same premise.” 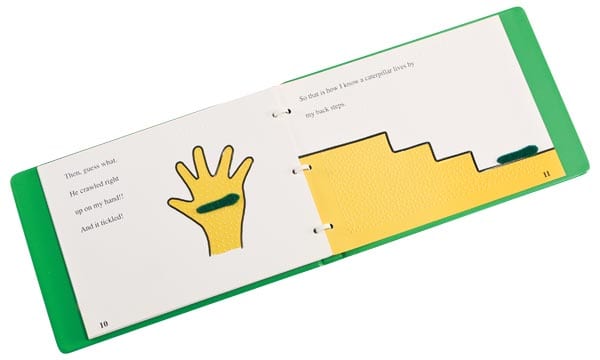 To bring the new caterpillar to life, Suzette began by hosting a workshop in March 2016 to gather design and construction ideas from a small group of graphic designers, artists, Teachers of the Visually Impaired (TVIs), and other APH staff. Participants used the provided materials to make rough mockups of the book. Suzette said, “I searched exhaustively online and in craft stores, art and school supply catalogs, hardware stores, anywhere I could think of for things I thought the workshop attendees could use to create appropriate tactile illustrations, emphasizing textures and things that move. I gave them suggestions—such as the idea that the caterpillar could slide on a clear elastic string, that in another book we had a butterfly finger puppet, or we could make butterflies semi-attached to the page.” 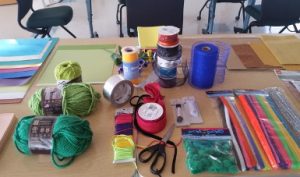 Afterward, she put everyone’s ideas together and made a storyboard to guide our vendor in creating print art for a prototype of The Caterpillar. She also hand-prototyped all the book’s tactile illustrations, and in combination with the print art, turned these over to her team. Many discussions ensued regarding book production, cost, and materials. Finally, in December 2016, completed prototypes were sent out for field testing by teachers and parents. One educator shared, “In the past, I have used APH’s older version of a caterpillar story, and it helped students with concept development. However, frankly, the students have shown much more obvious excitement about reading and getting to explore this book.”

After field testing, a few changes were made, and the development of the book concluded in 2017. However, due to delays involving a vendor, including efforts to reduce costs, the final book took longer to produce. Today, we’re excited to offer this text for everyone to enjoy. “It was as much work as developing a book from scratch, but the end product was worth it,” said Suzette. “Involvement of others in the workshop process and production staff from a very early date well before prototyping took more time but resulted in a new story and a hybrid method of production that can serve as a model for future books and expands what APH can offer. It’s also important to recognize that this kind of book and method of development requires ample time from an engaged manufacturing specialist; there are more significant design challenges than for books with more traditional forms of tactile illustrations—such as undetailed flat appliqued cutouts, simple thermoformed or embossed shapes.”

Changes from the Old to the New

How has The Caterpillar been revamped? Suzette said, “The old caterpillar was a shape cut from loop-material—kind of scratchy and a dark green—stuck flat to the page. This one is bright orange loop-material wrapped around a very thin tube that is threaded on a clear elastic and can slide up and down. He also has black elastic antennae.” Many of the surfaces the caterpillar crawls over in the old book have been incorporated in the updated text with new additions like a brick wall and fence posts. “This version has received colorful visual and tactile illustrations with textures and objects, making this book exciting for readers with visual impairments as well as readers with typical vision,” she said. Readers will be excited to find a bright orange monarch butterfly finger puppet on the last page as the caterpillar is shown what he will become after his adventures. Written in sans serif font and contracted UEB, the story is also shorter than the original and supports basic spatial concepts. On the shelf, readers will see a colorful and interesting cover and flysheet and a smaller book-like binding. “The students are more engaged,” Suzette said, “so more association of reading with pleasure and discovery. Teachers noted the book was more developmentally appropriate. The book is a bit smaller and easier to handle, too.” 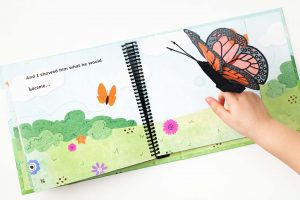 In the end, The Caterpillar modernization proved to be a fun and rewarding experience. Suzette said, “Having a text that talks about movement—which a tactual reader can then enact on the page by sliding and moving the caterpillar around – has the potential to trigger a connection for the learner between their own experiences of movement, the words of the text, and the illustrations. It’s not at all automatic that they know that an illustration is meant to represent something that is in the text and also—that it can be connected to their own firsthand experiences. I also really like the story’s ending about showing the caterpillar what it can become. It makes me think of the young child and what adults supporting them are also attempting to do—show them what they can become.”

We’re far from done modernizing the OTWL books. After The Caterpillar, be on the lookout for a revised version of Jellybean Jungle and other books rewritten in UEB.

Buy your copy of The Caterpillar today.