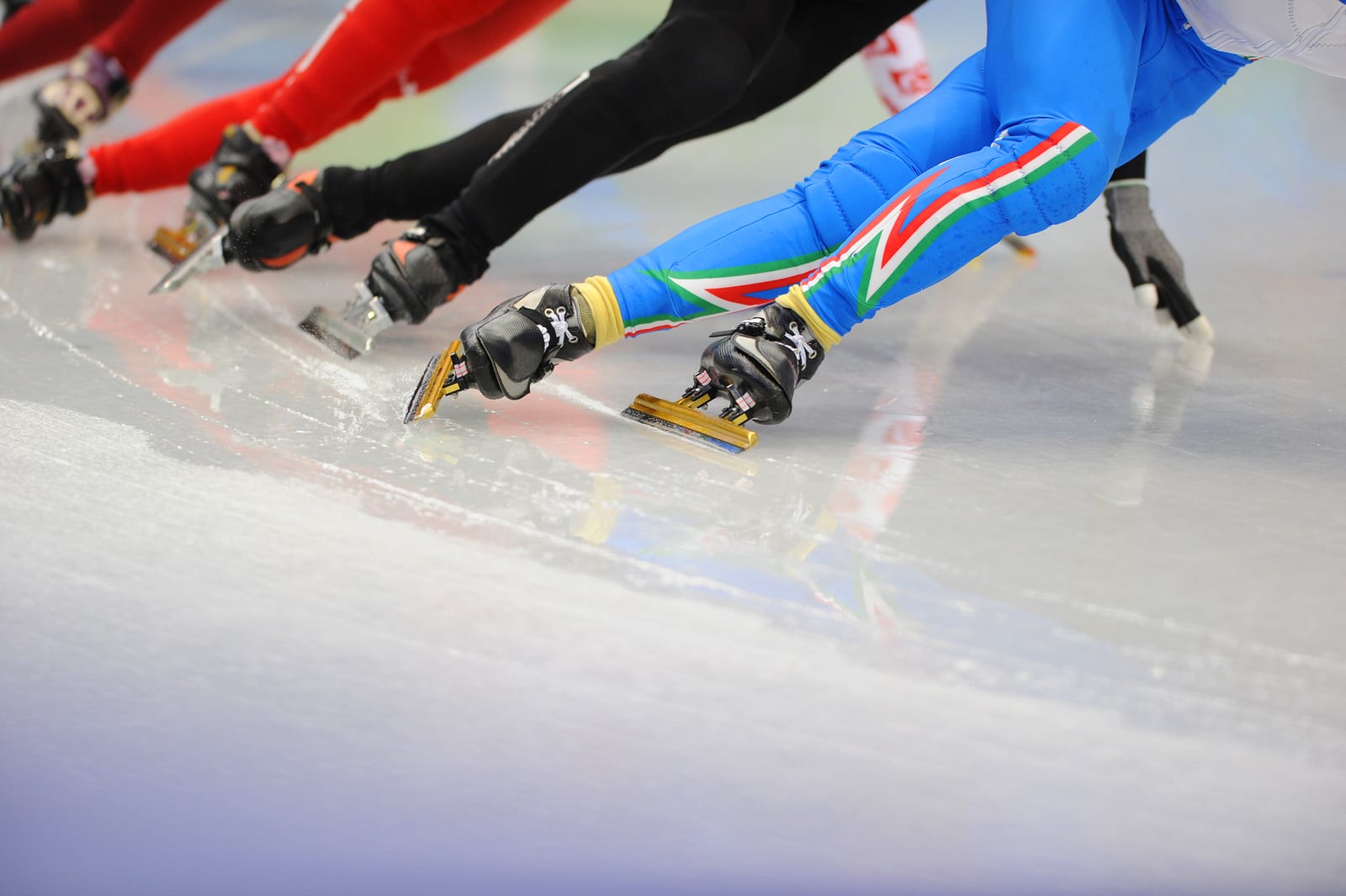 A deafblind speed skater skates as fast as he can to his dream.

Like every little boy in Ottawa, I grew up a hard core hockey fan. The only difference between me and the other kids was that I was deaf and would later lose my vision due to Usher syndrome. I wasn’t particularly good at hockey but I was a great skater, so a friend suggested I referee. Refereeing became my dream job and I was the most happy when I was on the ice, skating from one end of the rink to the other all while watching the puck fly between players. Refereeing would later lead to my interest in speed skating.

My life began to change when I developed vision loss, and lost both my job and my marriage and was forced to stop refereeing. What helped me back up was a beautiful black lab and service dog named Nemo and a friend of mine who suggested I try speed skating. With a community at my back, friends and family at my side, and about 100 hours of long and short track training at the big oval skating track at Brewer’s Park in Ottawa, I realized I could be a speed skater despite my disability. Mike Rivet, a past Olympic speed skater and a Speed Skating Coaching Board member, volunteered to be my coach. With his knowledge, background and experience, I learned the sport and became a world champion and gold medalist.

Many people wonder how I am able to barrel down an oval rink at top speeds without the use of vision or hearing. The answer is, I rely on feeling and learn through repetition. Every time I train on a new rink, I skate multiple laps around it until I feel comfortable and know where the turns are. To communicate with my coach, I use an ear piece; he shouts encouragement to me and instructs me on where I am on my last lap, whether I am falling behind, swaying, and whether I am off track.

In 2004, I started competing in small city-wide competitions across Ontario. Because speed skating is not a sanctioned Paralympic sport, I had to train to compete with speed skaters who did not have disabilities. At first, I would generally come out with a bronze medal so my team started to train me even harder to get me ready for province-wide competitions. I started to improve, and even ranked as the top speed skater in my age group in Ontario, winning a few gold and silver medals along the way. My team continued to train hard and in 2005 I attended my first world championship in Lake Placid. I brought home a bronze medal and ranked among the top 20 speed skaters in the world. In 2006, I returned to Lake Placid and brought home a silver medal and ranked even higher; later I attended the world championship competitions in Canada and Germany.

In 2008, Mike, my coach, got a letter from Russia with an invitation to the very first Open Blind Cup. I knew this was it, my chance to be on top. My team trained hard and in November 2009, I flew to Russia to represent Canada at the very first world championship for speed skaters with blindness. A week later, I flew back to Canada with four gold medals, four world records, and the beginning of a new movement.

The Russia Open Blind Cup opened new doors for me and helped me refocus my life goals. I knew I would never make it to the Olympics because of my disability, but what was stopping me from going to the Paralympics? Just one thing stood in my way, speed skating is not a sanctioned Paralympic sport.

With the help of student volunteers from the Algonquin College Public Relations Program, we began actively promoting my achievements in local, regional, national, and international news outlets, hoping to increase awareness of deafblind speed skating. Two volunteers, Samantha and Kristine, along with their team of Michèle and Vanessa, revamped and increased my online presence through social networks such as Twitter and Facebook. They also worked with my webmaster, Anita, to make sure the words “Paralympic speed skating” was at the forefront of speed skating conversations.

In 2011, Margarita from the Impaired Skating Organization in Scotland spotted me in the news. She sent me an invitation to the very first Impaired Skating Championship in Scotland. I flew to Scotland and competed against other impaired skaters. I represented my country with pride and brought home four more gold medals.

I continue to fight for speed skating to become a sanctioned Paralympic sport; I want to encourage others with similar disabilities to shoot for the best and never let their disability get in the way of their dreams. Like my friend Taylor, who is eight years old and competes as a figure skater at the Impaired Skating Championship in Scotland, I want them to know that their impairment doesn’t define them.

My philosophy has always been, “If someone throws you a negative, you throw a positive back at them. I am not going to give up.”